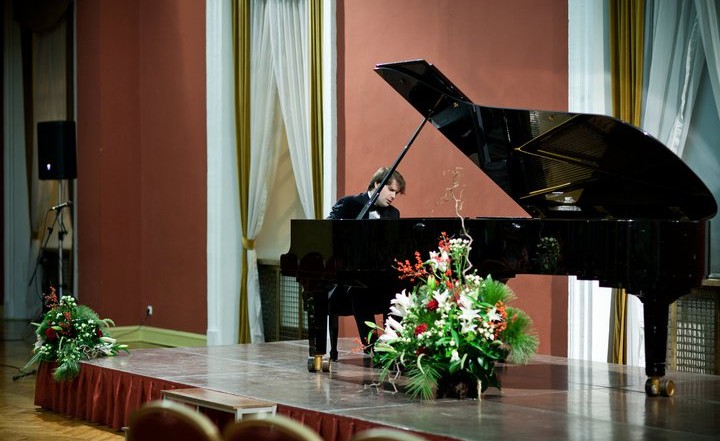 Composer of Ethnic Kitchen Edvinas Minkštimas: “Tolerance is cherished through exposure with other cultures”

The original score of Ethnic Kitchen was composed and performed by a world renowned pianist and composer, Edvinas Minkštimas – a Steinway artist, winner of numerous international competitions, and recipient of a Doctor of Musical Arts degree from the prestigious Julliard School in New York. Edvinas is a professor at the Washington Conservatory of Music, as well as a visiting professor at the Lithuanian Academy of Music and Theatre and the University of South Carolina. He received an MA from the Lithuanian Academy of Music and Theater and the Paris Conservatory.

Was this your first film soundtrack? What was unique about working on “Ethnic Kitchen”?

I’ve completed several musical projects for films before, but this was my first time scoring a film in Lithuania. To write music for this film was not difficult, I enjoyed it, but it was also a challenge – to write music for five film heroines with different cultural backgrounds, fates and life experiences. I wanted the music to reflect not only experience of the film’s heroines but also their countries, culture, and music. I studied Roma, Chechen, and Jamaican musical cultures and their specific musical instruments and techniques. I tried to reflect the national music of the heroines’ countries in the film. In the writing process, a lot of new musical tunes were born in my mind and I may lay them down as a musical project in the future. It was also nice to contribute to a very interesting project and to work with my friend Aistė (Aistė Ptakauskė, film director).

The film is about immigrant women living in Lithuania. You have lived in several countries and currently live in the US. How do you relate to the film’s theme?

While studying, I had to travel a lot with concerts, but that’s completely different from living in another country. My first experience living abroad was France, and I went there not knowing the culture, not speaking French. I had to create a friendly environment for myself, to learn the culture. I very much sympathize with the heroines of the film because it is not easy to adapt to life in Lithuania, where there is not a high level of tolerance. However, positive changes are happening in Lithuania, people are becoming more open and eager to understand other cultures.

What helped you the most to develop tolerance?

Exposure to other cultures. When you are forced to deal with culturally different people and you are forced to interact with fellow students or colleagues, then, you open up and find out that these people are very close in their way of thinking. The more you learn, the more you accept.

How important is national identity to you as a citizen of the world who has lived in and gotten to know several cultures?

We are all born somewhere; we identify with a specific culture. That identity gives us self-esteem. This is good, so long as it does not turn chauvinistic. I am proud that I am Lithuanian. I emphasize all the good things about Lithuania, I always defend Lithuania. At the same time, we learn from other cultures and living in other countries enriches our lives. Being proud of one’s country and its culture is a good thing, but it should not go beyond the limit and should not become an excuse for imprudent actions.

What is your favourite place in Lithuania?

Complicated question. I am fond of Birstonas, I like the old town of Klaipeda. I like the  Highland lakes and forests of southern Lithuania. I would like to spend more time surrounded by nature, but when I come to Lithuania, I spend most of my time in cities. There are so many beautiful places and I have yet to discover my favourite!

What does the kitchen mean to you?

Kitchen is only a functional place to me. Since I have no time to cook, I am happy to enjoy tasty food made by others. I’ve yet to uncover my abilities in the kitchen — maybe this will happen some day!