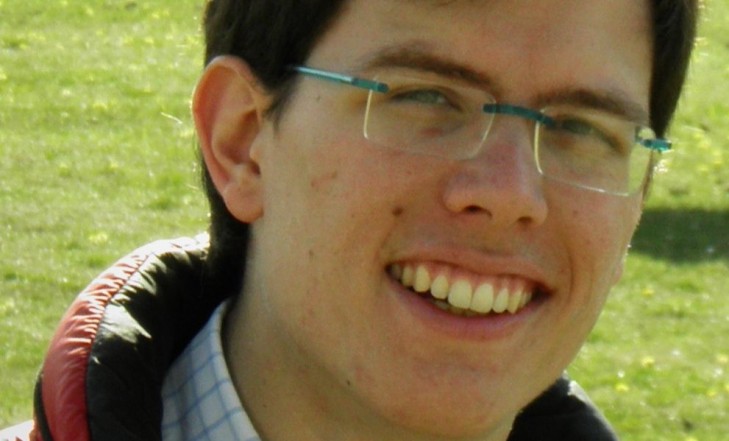 Italian Fabio: I thought that cepelinai are one of the fattest foods but I found a fatter version

Educated youth and their newly-found “Europeanness,” rather reserved, less talkative, and tending to complain people, “kepti cepelinai” or fried potato dumplings, lunch after funeral and other things that surprised Italian Fabio Belafatti in Lithuania… He arrived here to be closer to his wife and seems to have enjoyed life in Vilnius.

How did you came to Lithuania?

The simplest answer to this question is that I came to stay closer to my wife: we met five years ago in Riga and spent three years living separately, in different countries or even in different continents. Some people travel by train or by bus to meet their loved ones; for us it was low-cost airlines for three years in a row doing crazy schedules to get the chance to spend a few more hours together.

After some time we decided we needed to be closer. Lithuania was the obvious choice because finding jobs in Italy is quite difficult at the moment and being a foreigner my wife would have faced almost-certain unemployment.

Also, I had already lived in Latvia and I already knew something about Baltic culture, which I like a lot, so it came as a natural step. The more I live here, though, the more I discover interesting things, so if somebody were to ask me „why do you stay in Lithuania“, the answer would be not just love for my wife, but love for the country as well.

One good and one not so good observation about Lithuania

There are many things I really like about this country, so it’s difficult to find one, representative example. Moreover, it’s often difficult to ascribe a positive or negative feature to the country itself or to its inhabitants.

I think something I really like about the country and about its people is how most of the younger, educated people are eager to fully live their newly-found “Europeanness”, with a pride that you don’t see anywhere else in Europe, travelling as much as they can, seeing other places, opening their horizons.

I like the way the country and its people are proud of being part of Europe and don’t accept to be looked down upon as “newcomers” or second-class citizens by other Europeans. We have very negative stereotypes about Eastern Europeans in the “Old Europe”, and it’s great to see that young people here don’t care about this and carry on with pride trying to do their best against stereotypes and misconceptions. It gives me hope about the future and about the role that this country will play in tomorrow’s world. There’s just so much talent here, you guys have great opportunities ahead.

I also like the fact that most young people are interested in hearing what foreigners have to say, they are curious about the way we see Lithuania, and are willing to accept a good deal of constructive criticism.

Answering to the “negative” side of the question without falling into stereotypes is a bit difficult. I think what I really don’t like is probably the other side of the previous remark: for all the young, educated, open-minded and talented people out there in the country, there are lots who are surprisingly intolerant. I probably don’t have the right to complain because I come from a region in Italy that is probably a World champion of intolerance, but it always shocks me to hear people complaining about “blacks” or “Muslims” here, as if the country was invaded by hordes of blood-thirsty illegal immigrants. I’ve heard some of the most racist remarks from people who have probably never even met anyone from outside Lithuania, and this makes me really scared for the future, because the country is inevitably going to open up to external influences and will have to face diversity sooner or later.

I would really love to see Lithuania live up to its historical heritage as one of the most tolerant countries in Europe, proud of its diversity and inclusiveness as it used to be in the Middle Ages, but I’m afraid of these racist trends clearly visible among many social strata. And it’s something that really saddens me, coming from people that migrated (and migrate) a lot.

What are the main differences between Lithuanians and your compatriots

The difference here is quite obvious: take 50 Lithuanians and 5 Italians, and we will make more noise than the 50 Lithuanians! My compatriots tend to be very easy-going, ridiculously talkative, and generally willing to open up with anyone to talk about all sorts of things. Lithuanians are far more reserved, far less talkative, and tend to complain a lot. People from the outside may see them as shy, or even depressed, but I think it’s just a matter of diffidence towards others.

But don’t get me wrong: I actually think these are all very positive things. Lithuanians may be more difficult to approach and get trust from, but you always know that once you succeed, you will have found a sincere friend.

Italians seem to be friendly with everybody but they tend to forget you quite easily. You matter for them as long as the chat lasts, afterwards it’s over. I think people here are much more sincere, more trustworthy. And I love the fact that they complain a lot: it can be irritating sometimes, but without complaints, things would never change.

What have you learned from Lithuanians?

Lithuanians (and Lithuania) have taught me the importance of understanding other people’s experiences and differences. There are so many differences in the way we look at things in Western Europe and the way people here understand their history, identity and future. Living here I’ve learned that something that is good in one place can be very bad in others and that you should always respect the feelings of others, even if they seem strange. That doesn’t mean that one should not express his opinion or blindly accept local people’s behaviour, but at least one should make an effort to understand different ways of thinking.

I think – I hope, at least! – this also protected me from that kind of obnoxious “expatriate arrogance” that so many Westerners have when they live in any place that is not Western Europe, and tend to see the locals as a bunch of backward people. Lots of expats have this feeling of superiority which comes from the lack of willingness to learn from who is different.

What is your favorite place in Lithuania

I‘m undecided between the lakes of Aukštaitija, the city centre of Vilnius, and Antakalnio kapinės, a place where you can see so much history squeezed in one single piece of land that can drive you crazy.

Both my funnies and strangest moments here have to do with food, I guess. The funniest (or maybe most stupid) moment was when I discovered the existence of “kepti cepelinai”: I already thought that cepelinai are one of the fattest foods on earth but when I found out that there’s an even fatter version of them, I gave it a try. The result was me almost suffocating on greasy food with my colleagues around me betting on how much I could eat. I ate them all out of pride and spent the rest of the day in the office half-sleeping because of digestion, with people around me wondering if I had taken some narcotics to feel so much like a zombie.

My strangest moment by far was when I attended a funeral here in Vilnius and I was invited for a lunch… It’s something that we don’t do in Italy on funerals: maybe if you have relatives coming from another town, you offer them some food, but we don’t really have the tradition of a funeral lunch. I think if we had, people would feel compelled by social norms not to eat, to show that they’re all suffering. Funerals are much of a constructed social moment in which suffering is often showed more than necessary. I was very much impressed by how things work differently here and people behave much more sincerely during funerals, letting every day moments “sneak” into a sad occasion. But it was really strange because I had no idea how to behave and I thought people expected me to assume some specific, pre-determined behaviours or attitudes. It was relieving to see that even in such a moment, Lithuanians just prefer sincerity.

What does the kitchen mean to you?

The kitchen is probably the place when I really feel “Italian” and I enjoy being so. I don’t care much about my national identity and I’m happy to experiment and try new things, but when I’m at home, in my kitchen, it’s the time and place to be really Italian. I like to indulge in those apparently irrelevant small things typical of Italian cuisine, such as cutting onions in tiny pieces and stir-frying them in oil with a bit of water the way my father taught me to do to get the best basis to prepare tomato sauce, or using only Italian olive oil, or cooking pasta in the only possible way – the Italian one, of course!

Although I don’t think I have any feeling of superiority towards anything or anyone, I have to admit, when it comes to cooking there’s no limit to my chauvinism: if I have a frying pan in front of me, I really think Italian-style cooking is just the best and I can get ridiculously upset if someone tries to diminish the significance of our culinary achievements. This is strange in fact, because when I think rationally, I actually love other countries’ food as much as I love the Italian one. Probably it’s just a matter of carving out a space for my own identity, as some sort of “safe haven” for my being Italian.