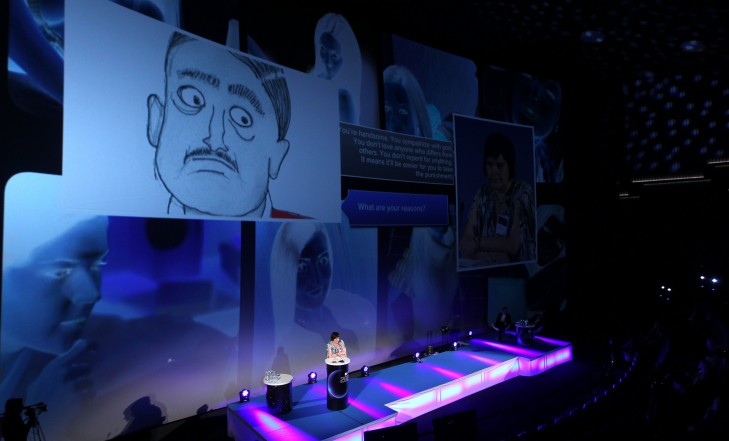 Aistė Ptakauskė on what she Does: 'I Design Experiences'

This is a quote by a world-wide known American mythologist, Joseph Campbell, said to acclaimed American journalist Bill Moyers in a very famous series of interviews titled The Power of Myth. Joseph Campbell devoted all his life to studying myths of different nations and tribes of the world. His work has had a huge influence on the American tradition of storytelling in general and on the Hollywood tradition of screenwriting in particular. I myself studied from textbooks that were based on Joseph Campbell’s mythological theories.

When Bill Moyers asked Mr. Campbell why he considered myths so important, Joseph Campbell explained: “Myths are clues to the spiritual potentialities of the human life. […] What’s the meaning of a flea? It’s just there. That’s it. And your own meaning is that you’re there. We’re so engaged in doing things to achieve purposes of outer value that we forget that the inner value, the rapture that is associated with being alive, is what it’s all about”.

Experiencing the joyful ecstasy of being alive is all what we’re striving to, claims Joseph Campbell.

“How do we get that experience?”, asks Bill Moyers, naturally.

And this is where I’m losing you…

Well, let’s try to stay philosophical for another moment here. Let’s dig deeper. What are myths? What purpose do they serve? What do they even talk about? Let’s see: birth, death, marriage, falling in love, leaving the safe harbor of your parents’ home and taking responsibility for your own life, getting old and surrendering to the order of the world… Essentially, these are the moments in our lives when we have that feeling, the feeling that just being there and being alive is enough. How often do we experience such moments? It depends, I guess… But probably no matter how often these moments occur, they’re never as frequent as we’d like them to be. Myths are human attempts to capture these special moments so that they can be relived over and over again. Myths contain the refined essence of these ecstatic moments of the human life.

Now, isn’t it what art is supposed to do too? Because myths are art before ownership. Come to think of it, ownership of a story, a performance, or a piece of art is only important to authors who want to get paid for what they write, perform or make. But to us as an audience, ownership of a work of art is secondary. What’s primary is the experience that we get.

So when people ask me: “Aiste, can you tell us IN TWO WORDS what is it that you do”? I, IN TWO WORDS, reply: “I design experiences”. I know you can see many more than two words next to my name in your programs: screenwriter, novelist, director, playwright, producer… To me, that’s all secondary. When I start working on a new piece, whether it’s a film, a theater performance, a live event or a television show, doesn’t matter. All what matters to me is creating an experience in the mythical sense of the word. I ask myself: “Will this piece take you out of your mundanity and awaken your senses in a way that will make you feel a little more alive than you’re used to?” I feel it’s my job to make sure that it does. Whatever it takes: talking, singing, dancing, filming, playing the harp… The medium to me is secondary.

I feel we often limit ourselves by sticking religiously to a medium. “Is it film?”… “Is it theater?”… “Is is literature?”… “Is it art?” Who cares if it provides us with an experience of being alive?!

Have you ever thought when after a show, a film or a concert you find yourselves dwellling on how it was done rather than on what it did to you? I usually find myself analysing the means of expression of a piece when the piece failed to give me an experience of life, not an illusion of life: “Oh, it looked very believable”, “It was just like in real life”, but an experience of life: “I felt it, I felt it in my gut, it made laught, it made me cry, it made me ashamed or scared or embarrassed, it made me feel human”. A story well told, to me, is like a good party with resonating memories that reinstate me in life.

I’m not saying that we shouldn’t think about the medium at all. Understanding of what every medium has to offer helps us create more powerful experiences and stories. What I’m saying is that we shouldn’t start with thinking about the medium. “I want to make a film! What shall I make it about?” That’s the common track of thought that doesn’t always result in much. I suggest we turn it upside down and ask ourselves: “What is the experience I want to design?” and then look for means that can help us do it in the best way. Means of expression change and develop by hours nowadays, but the human desire to feel alive remains constant.